Although I am a Bills fan, I have developed a slight loyalty to the Green Bay Packers. There is one reason for that.
Yup. One of my favourite MST3K episodes is Giant Spider Invasion. It is ingrained enough in my memory that whenever I see a movie or TV show with someone running around nonsensically, I always think to myself  "WOOO! Packers won the Super Bowl!"

And that is my segue into showing off some of the cards I got when I was randomed the Packers in an El Cheapo random of 2014 Topps Chrome. 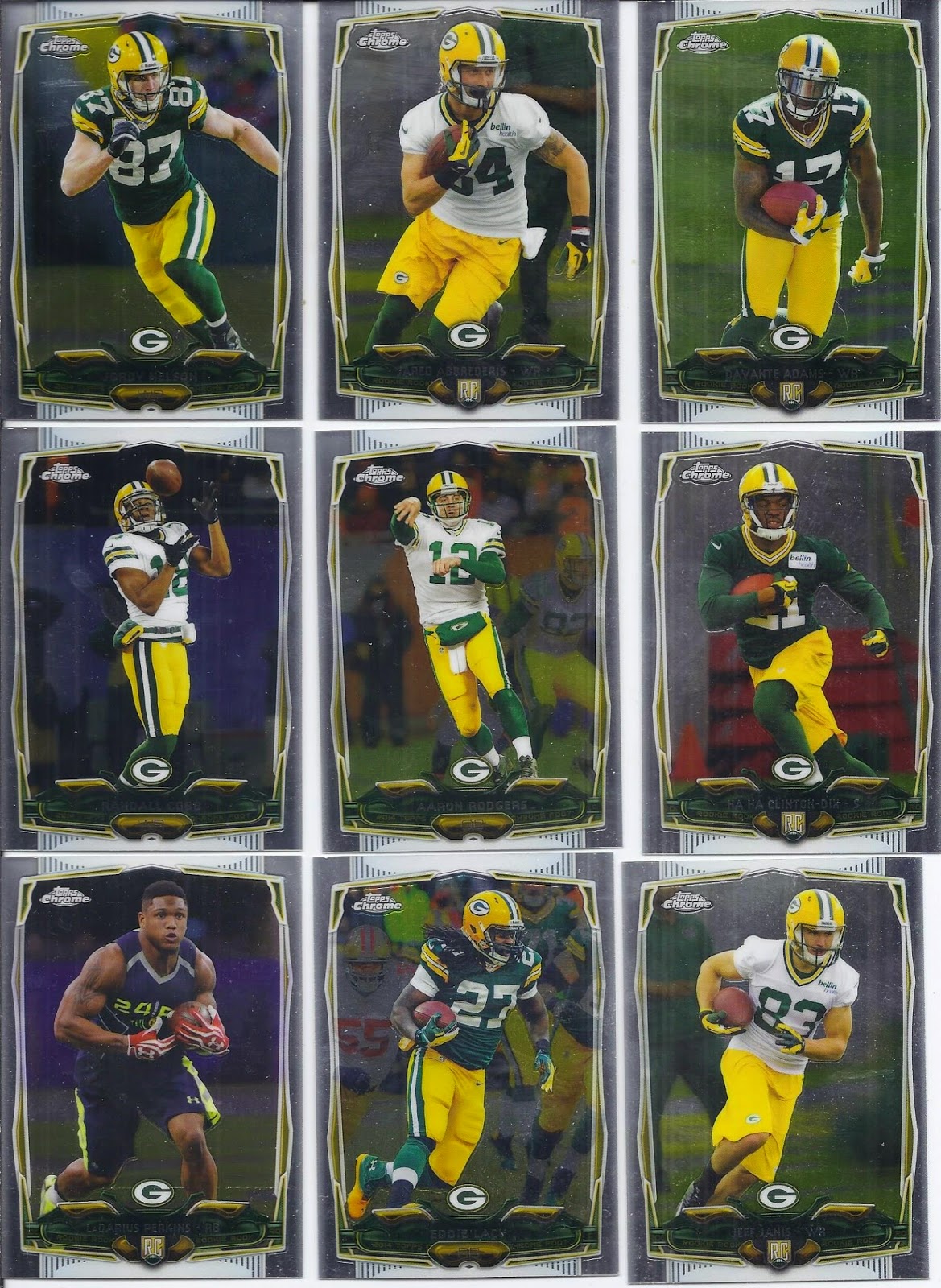 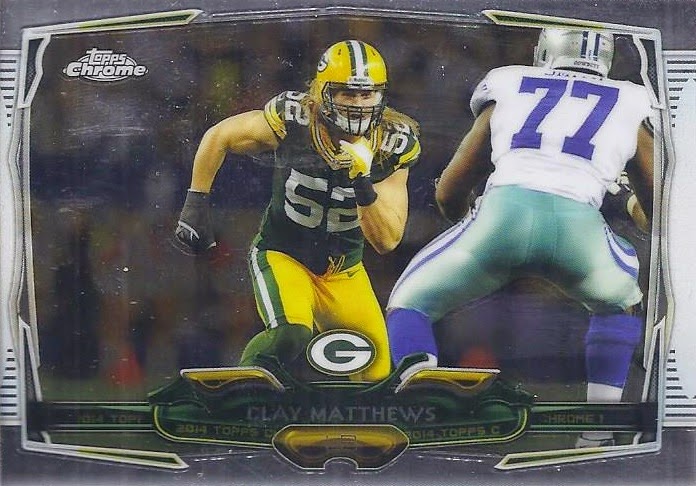 A base set of 220 landed the Packers 10 base cards. Definitely above what they should have based on per team. I'd rather it had stayed at a page friendly 9 at most. I got enough for 2 team sets, lacking only a Jordy Nelson to make it 3. I got 3 or 4 of every other card though. That's decent collation. Any Packer fan want the additional team set? 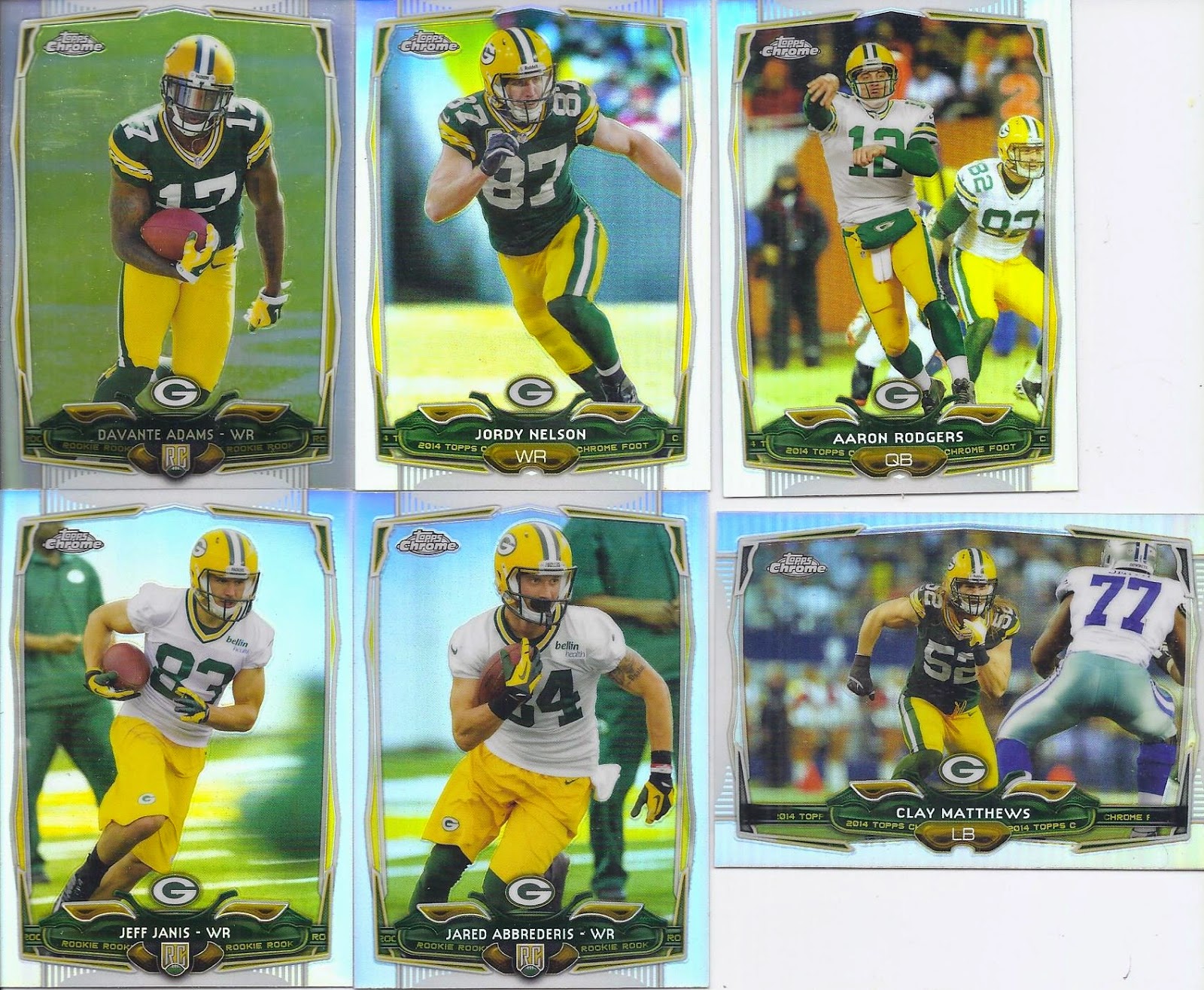 Chrome means Refractors, and I got 6 of them. The Adams doesn't look like one, but is one. The borders just scanned stranger than the others. 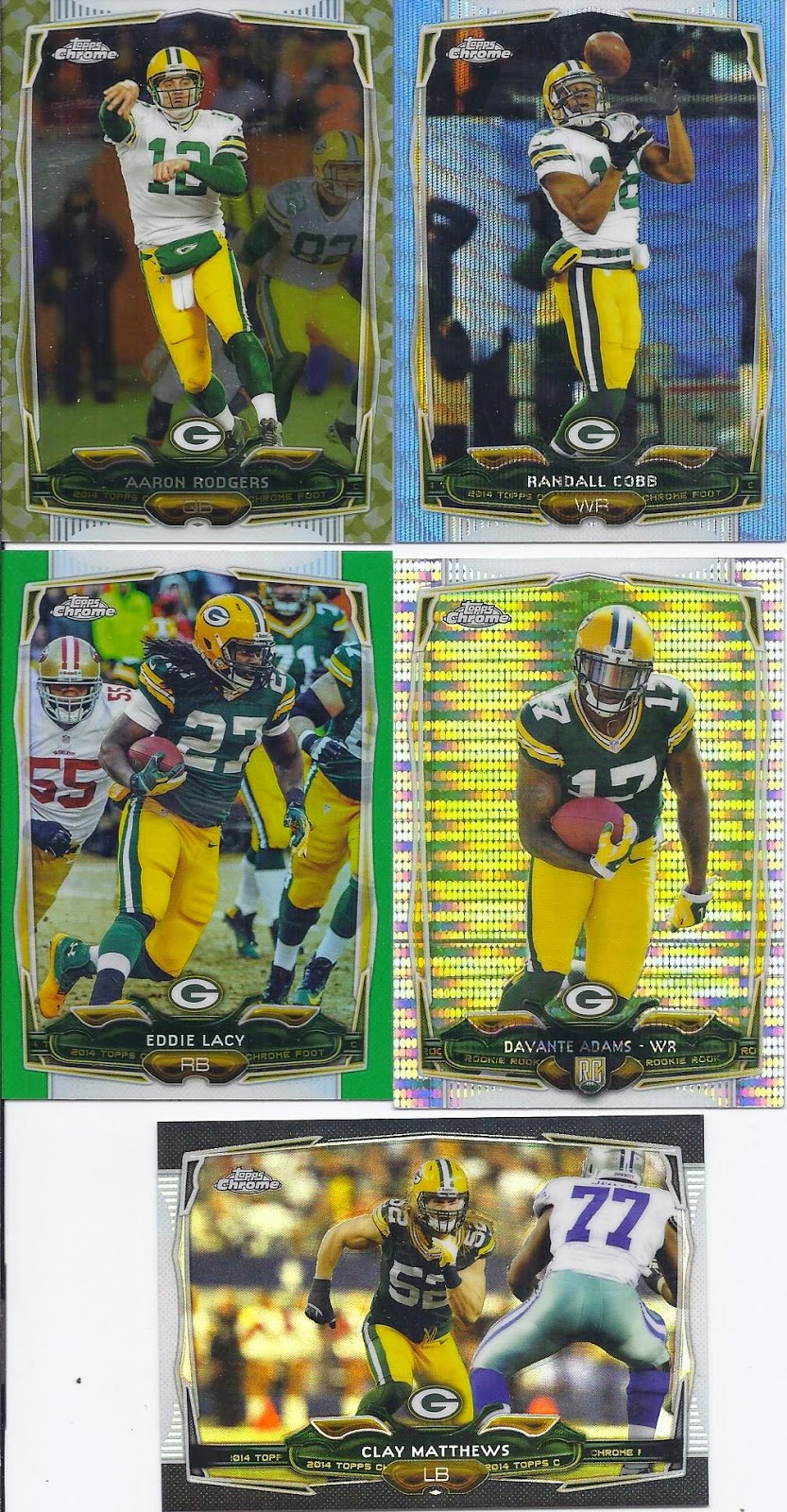 Even more parallels! The blue wave, green and pulsar are not numbered. The camo parallel of Rodgers is /499, and the black of Mathews is /299. That green is just a beautiful card. I probably just think that because of how it co-ordinates with the Packers unifrom, though. 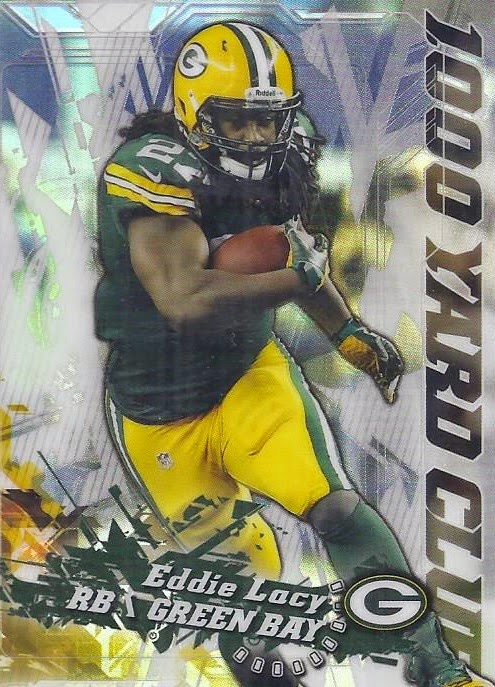 Here were some insert sets that were familiar to me through the regular Topps flagship that I purchased. 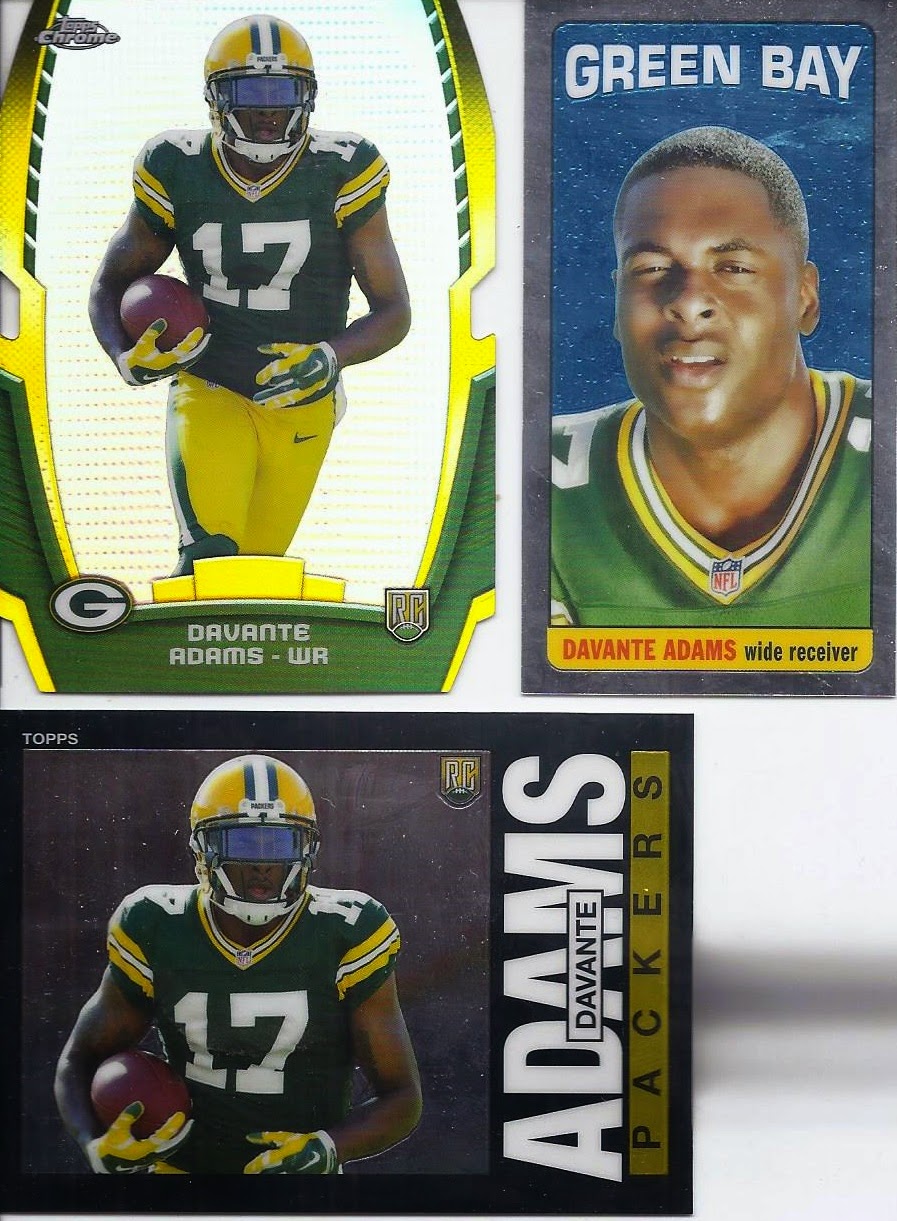 And some rookie inserts I didn't see in any of my flagship busting. An attempt to brute force me into becoming a super collector of Davante Adams. 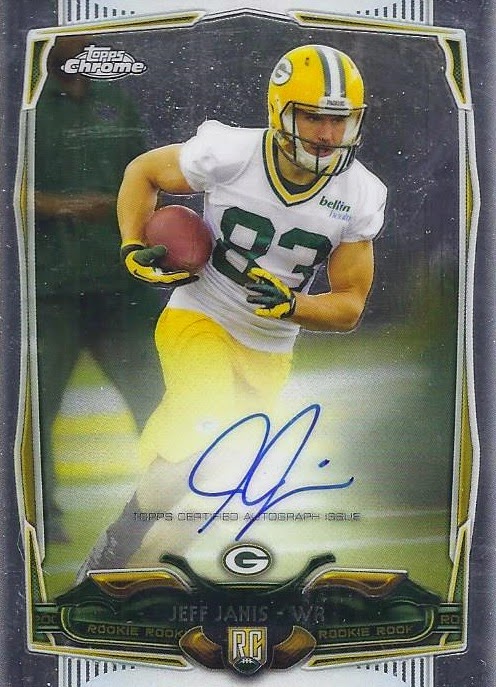 With only 1 auto per box, therefore 12 per case, luck was on my side as I ended up with this one. He was a 7th round draft pick that hasn't seen much action this season, but it is on-card. That's always a plus. 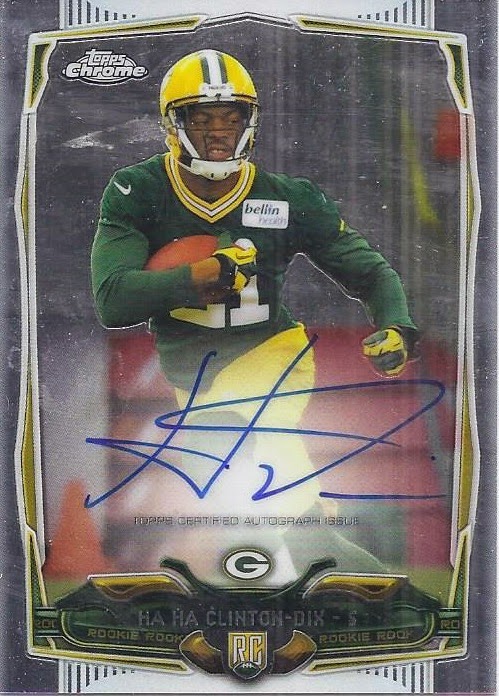 And even better, I ended up with 2 autographs, with this being one I really wanted. Not for any reason other than the guy'd name is Ha Ha Clinton-Dix, but I do I really need any reason beyond that? And another on-card auto as well. The Packers definitely hit above average by getting 2 of the 12 autos. Who needs legibility? But, if my name were Ha Ha Clinton Dix, I might be tempted to half-arse it with my auto as well.

So, this break went really well for me.

In the meantime, please enjoy more Wisconsin jokes from Mike and the Bots.

Posted by buckstorecards at 17:53