The last of the group break recaps is from the Blue Jays randoming. 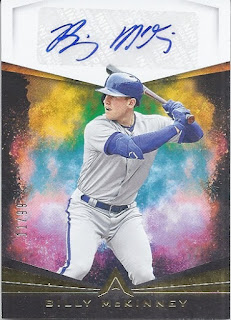 While McKinney's time with Toronto had come to a close by the time this set was released, at least I have an autographed card (and Ascension's first appearance in these posts) to commemorate his time with the Jays. 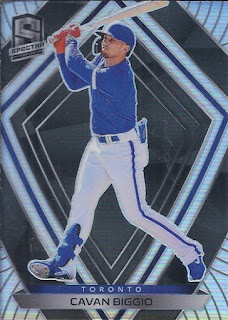 The only other player to make only one appearance in the shipment was Cavan Biggio, seen here on the base design out of Spectra. I'm still waiting for the redemption on his auto out of last year's release. 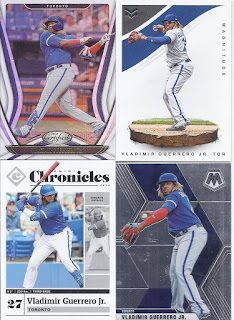 Last year, Vlad Jr was all over the release, including an appearance on the box. There's a slight reduction this year, but only slightly.

Taking the role of Cavan Biggio as the secondary Jays rookie in the set was Shun Yamaguchi. While he didn't really set the record book on fire in his first MLB year, I'll just chalk his 8+ ERA up to the wackiness of the 2020 season. 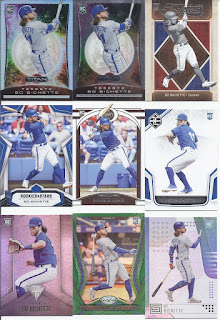 The primary rookie for Toronto should be no surprise, with Bo Bichette being all over the sets and their parallels. 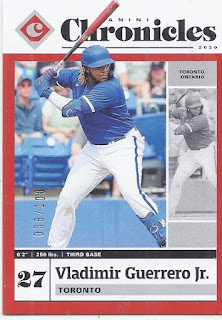 Something interesting about the parallels was that I only got one of the /100 parallels.

But I got a trio of /50 parallels. The green ones look sharp, but the blue one, as always for Jays cards, is just perfection. 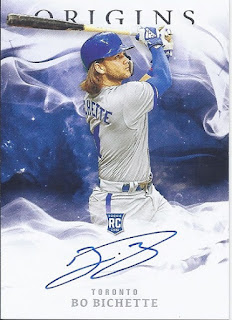 When you start a post with an autograph, you might as well end with one as well. Although I did land a Bograph last year from Chronicles as well, you really can't have enough for anybody on a team you collect. This is the base version of the totally-not-Inception Origins portion of the set.

I'll take a short break from my favourite release(s) of the year, but I will have more Chronicles next week as I work through 4 hobby boxes worth of it.