The mailman dropped of my second group break goodie bag from mojobreak coming off selling a previously pulled Payton Manning auto /5. These came from a couple randoms, one baseball and one football, and a late discounted purchase of the Jaguars. I'll just do the football.

I'll start with the Jacksonville stuff. They have a good number of rookies this year, plus there was some stuff from last year which might see a nice Denard Robinson for TMM.

While I didn't get a Denard hit, I think Dennis will like this card: 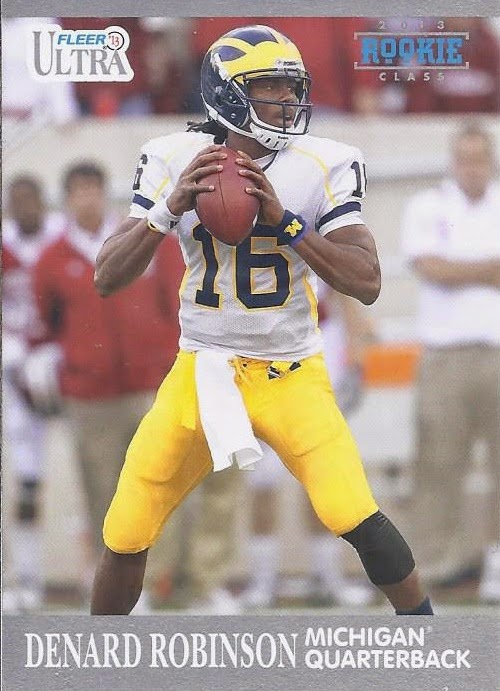 Pictured as a Wolverine and listed as a QB? Yes, I think that despite this only being a base card, it will be a nice addition to his collection. 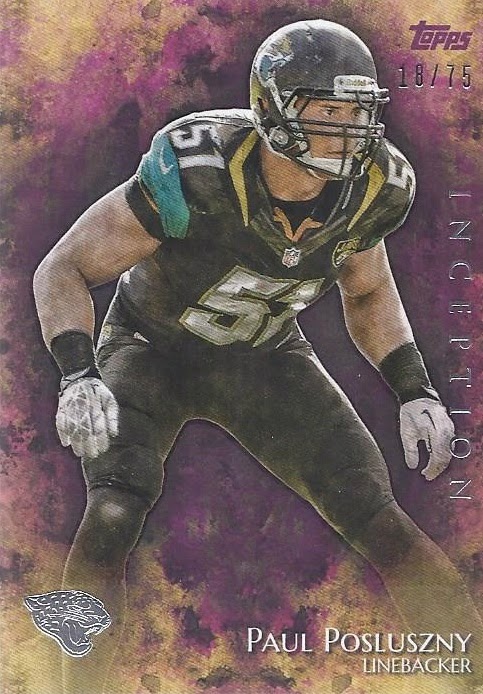 Maybe posting this nice /75 Magenta parallel of Paul Posluszny is a make-good for posting a picture of the former Bill when he had been knocked on his hinder by Trent Richardson. 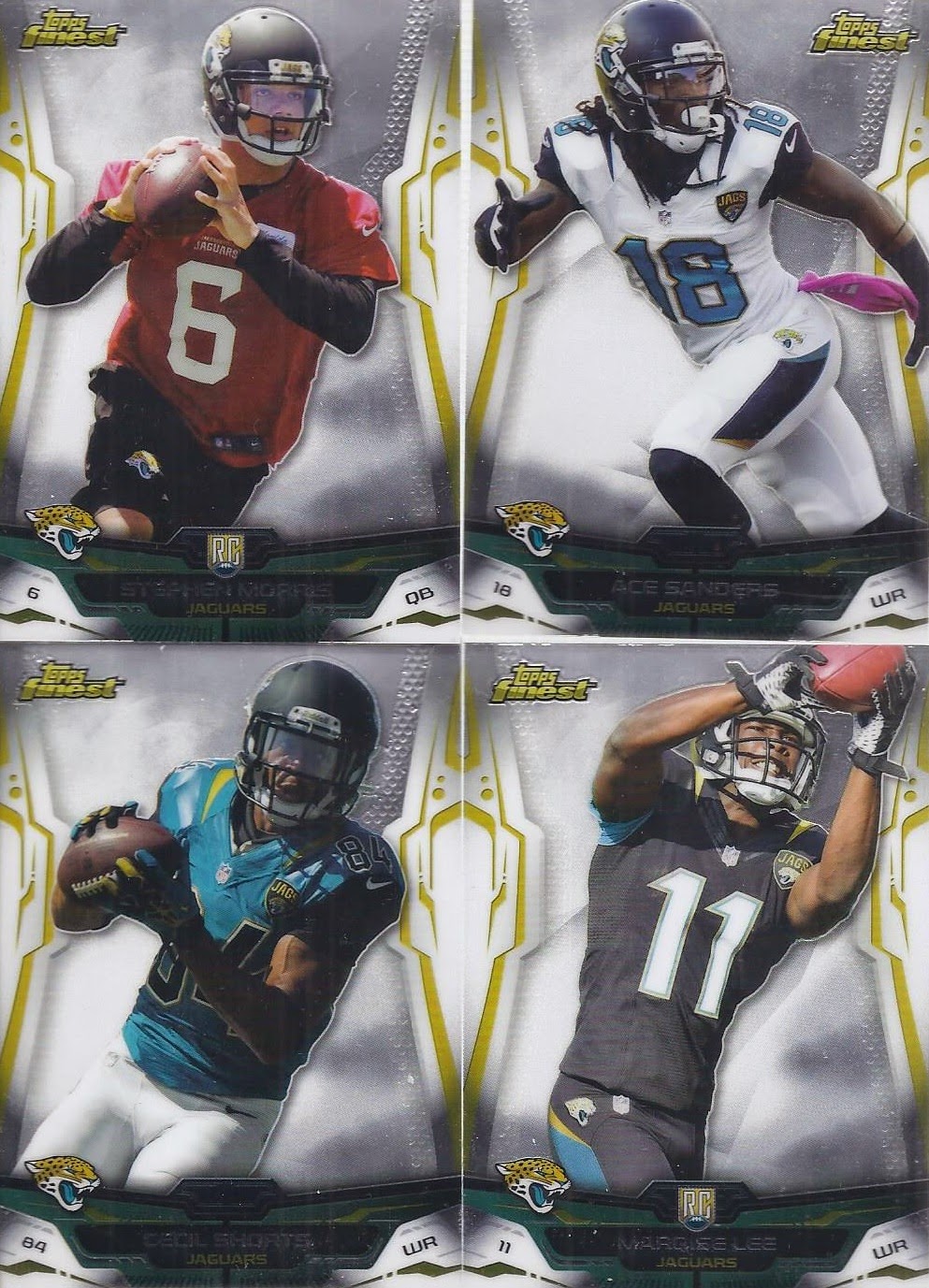 The most base cards in this came from a box of Finest. A nice mix of uniforms, that's for sure. And there really need to me more cards out there of people named Ace. 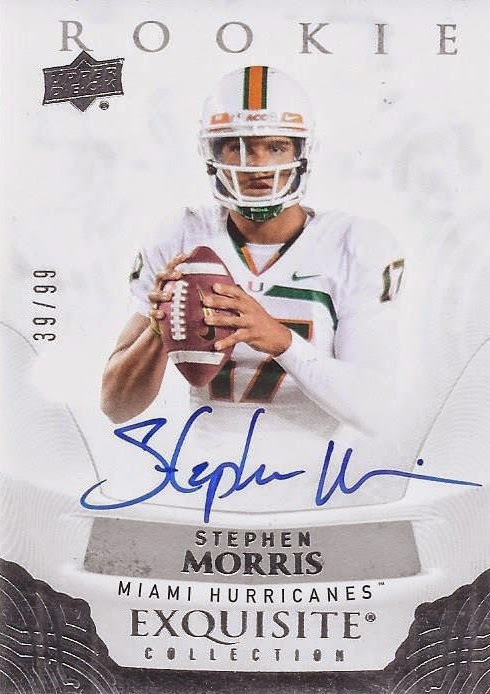 And if that Stephen Morris from Finest wasn't enough, here's a nice on-card autograph from him. If he were more than a practice squad squad, it would be nicer, but it is a legible first half of the auto, and it pops nicely from the white background. 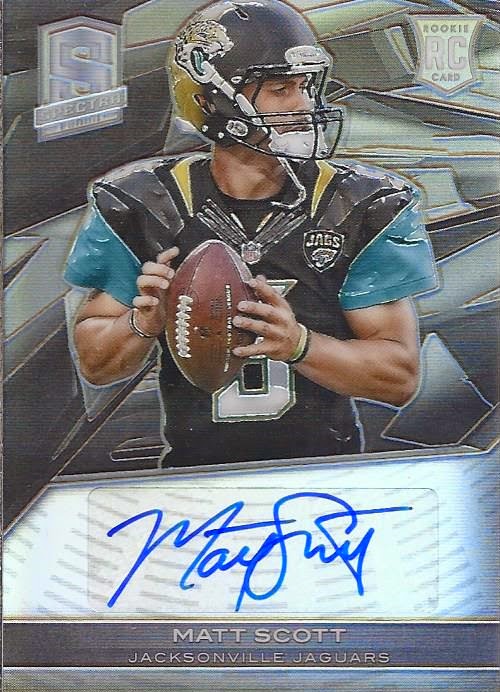 And here's my second hit - last year's practice squad QB. And much like the Morris, it is also /99. But it is another aesthetically pleasing auto, so I can appreciate that as well. 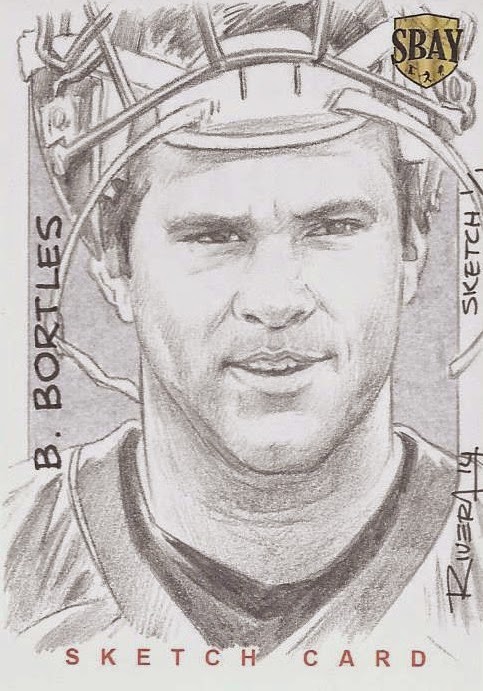 But for me, this was the big pull, and the surest keeper for me. A drawn 1/1 card? Yes, please! This is certainly the first one of these in my collection, and my only complaint is that the stock is thinner than I would expect. If you've ever held one of those Upper Deck 20th Anniversary hockey parallels, those would be a good comparison. But that only means I need to pick up a slightly more secure case for it. And if that is my only complaint about adding a 1/1 to one of my mini collections in an unexpected way, I'll complain all the time.

I also picked up a slot in a random break of 2014 Prime. Even if I didn't get a hit, I'd get some great photos. The randomizer gave me a combo slot of the Rams/Falcons.

And I pulled a relic. 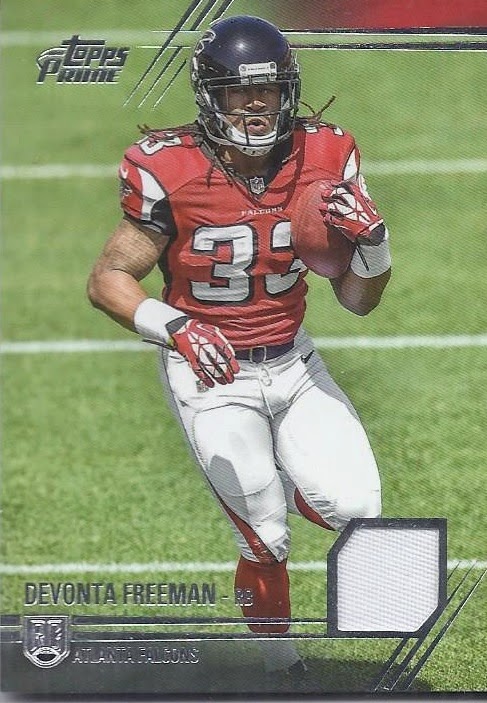 And that might be among the smallest single relic windows on a card I've seen in a while. But, when I get to posting the Richard Hamilton ball relic from 1999, it won't even be the smallest in my collection.

And, here are the base and the inserts: 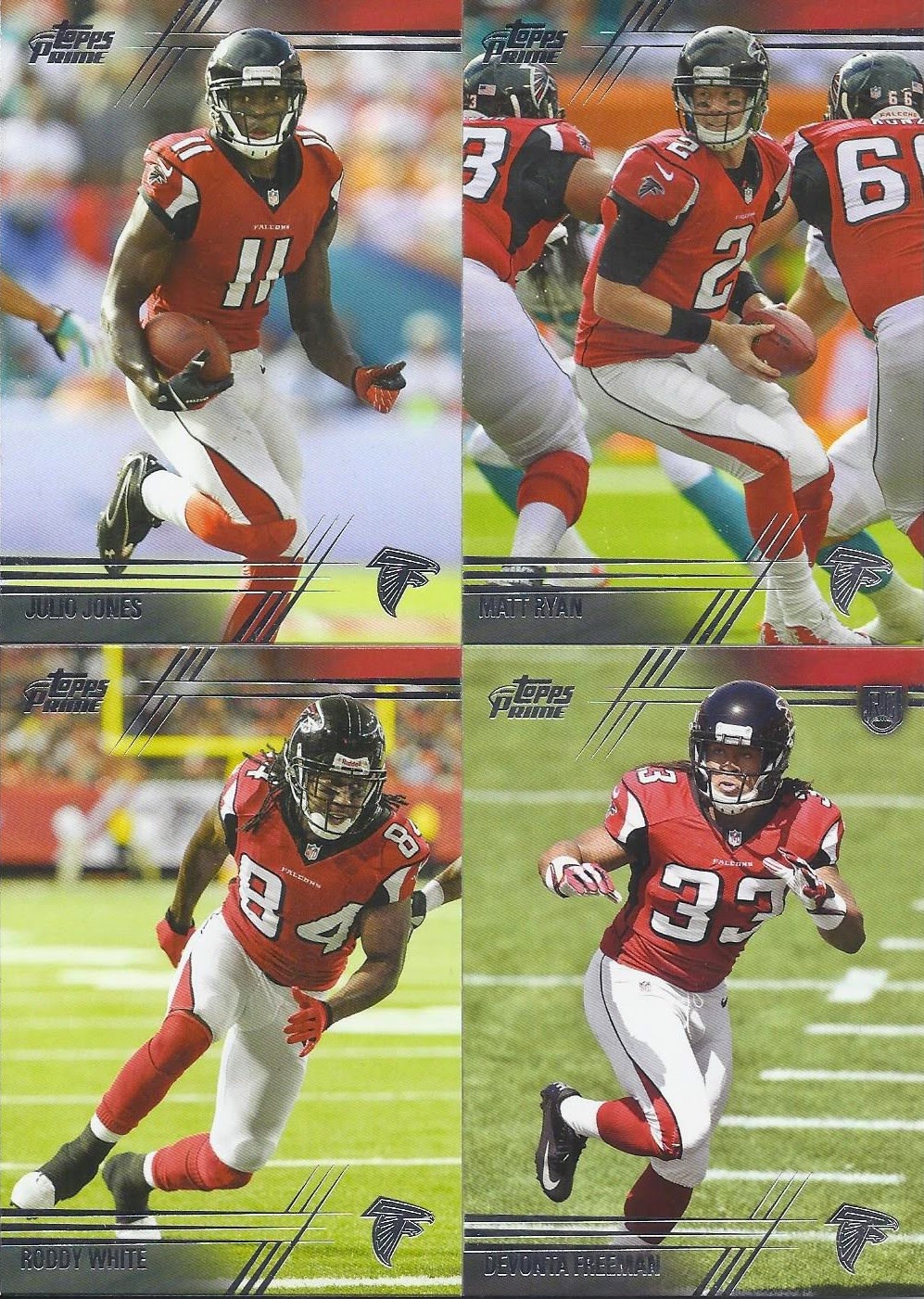 More Falcons! I like the hand-off photo on the Ryan. It is something a little different for a QB's card. 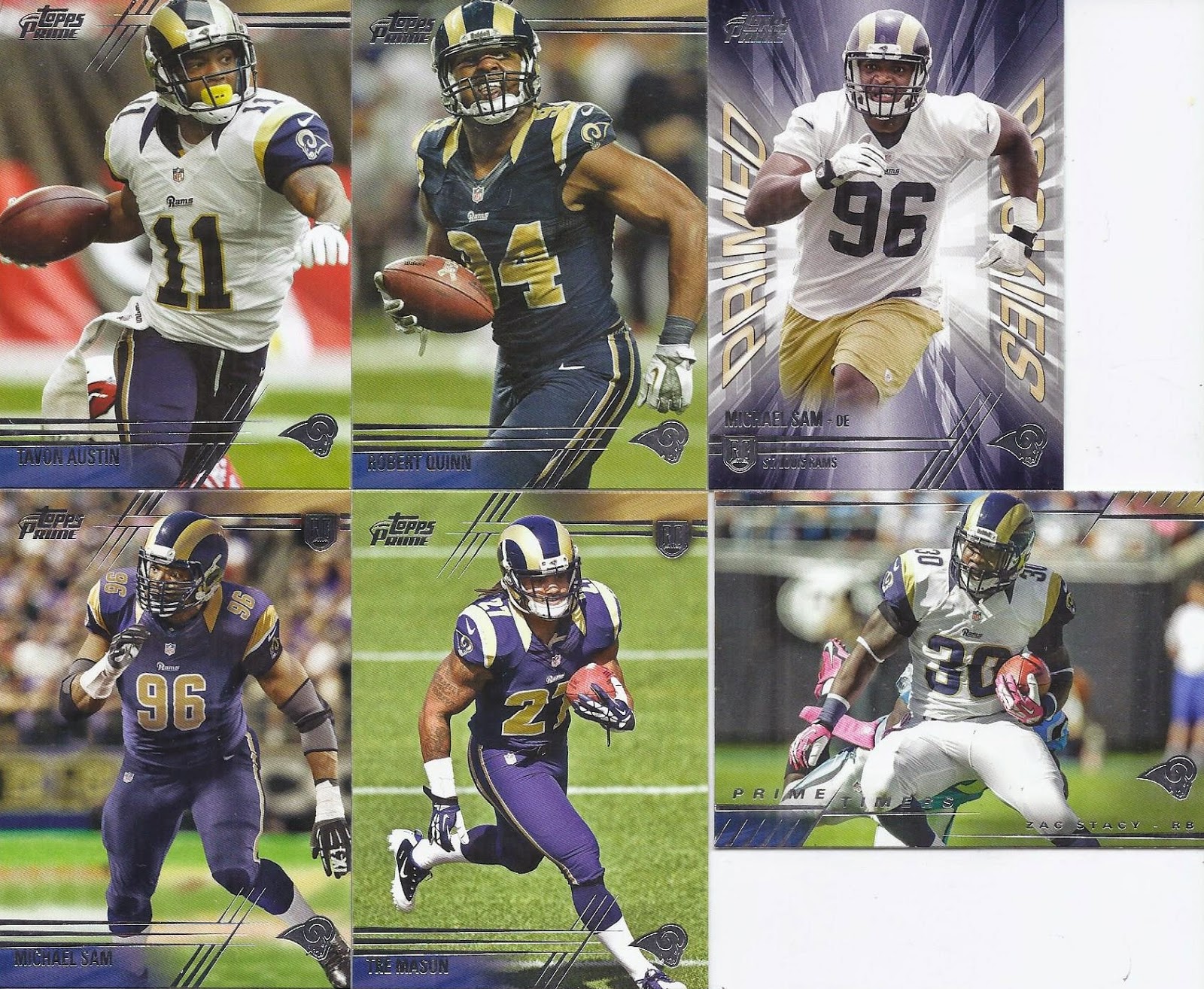 And the Rams! While he might not play a game in the NFL, it is still good to get a couple Michael Sam cards out of the mix. And as much as I like the Matt Ryan, Zac Stacy easily wins this photo battle. While I didn't do as well in this break as with the Jags, I did end up with some nice keeper cards, and that's what is important.

Tomorrow, some Cardinals.
Posted by buckstorecards at 13:41