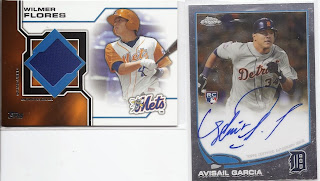 Here are the hits from this. If I recall correctly, both came from the final packs I opened from each. I'd already picked the Mets as my team (I opted for whichever of the Mets or Jays wasn't the first picked). The Garcia is a very hieroglyphic autograph. It isn't numbered. In fact, the autographs were the only cards in the box that weren't refractors. 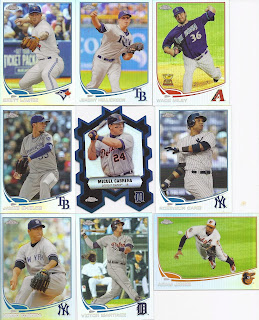 Both of the multi-sided insert cards went to Detroit. The Lawrie was the only card in this that went to the Blue Jays slot. The Jays/Brewers was the only slot that didn't at least receive an XFractor in their envelope. But, there might be a Sakic or three in the envelope to lighten the loss.

Edit: The Shields card should have gone to the Royals slot, but it was in the Rays envelope. A screw up on my part, but since I had them, the loss is on my part. 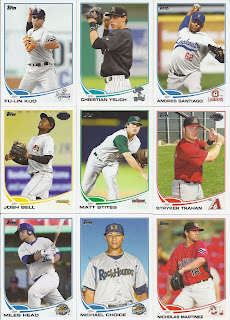 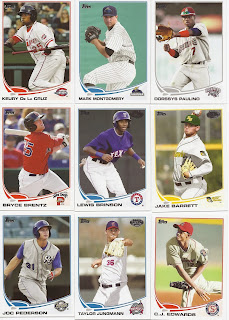 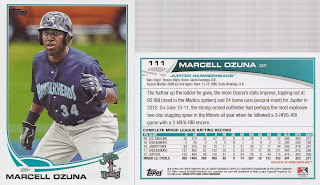 And this wraps up the Pro Debut base cards. I'm not sure why I opted to have the Ozuna card at the end by itself. But, there was 1 too many for the scanner, so that's as good a reason as any.

Plus, I can show the back and how it was so easy to sort these cards by team. Unfortunately, it did list the Paulino card as a Pirates affiliate, when he was with Cleveland. Fortunately, Cleveland was not a claimed or randomed team, so I don't feel too bad about it ending up in the Pirates envelope.

Looking back, the big winners were the Cubs (two autos, although I randomed one off), the Rays (getting an auto, and probably the best card in the break with the Sepia of Wil Myers) and the Tigers with the auto, and the two Connection Die-Cuts. But, considering we got a hot box full of Refractory fun, we did a lot better than can be expected.

Hope you enjoyed this, and your cards should arrive sometime next week.
Posted by buckstorecards at 18:24