I'll be going back a day today with masked Mondays, with the three cards I'm highlighting being ones I picked up at a show yesterday. 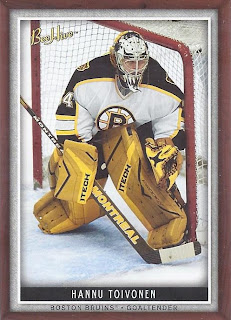 I'll start with one that has been on my radar for a bit. Typical of the Beehive cards, it isn't the best photograph, but I'll take it. This cinematic reference would go far better with a Chiefs jersey, as it salutes Denis Lemieux's mask from the classic hockey film Slapshot. It's hard to see from this photo, but much like Steve Shield's salute to Gerry Cheevers, the mask wraps around with the ears and hair painted on as well.

Something a little simpler for my next entry. 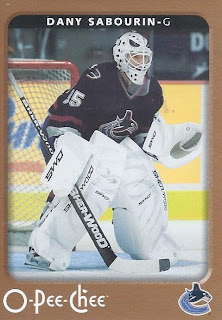 Sometimes, less is better. Especially when the photo isn't a close-up. Both of these came from an 8 fora buck bin. The same table also had a bunch of $2 relics/autos, which I looked through and found several that surely will get scanned over the next week or so. I grabbed a few interesting ones there, but only one would qualify for the mask binder. 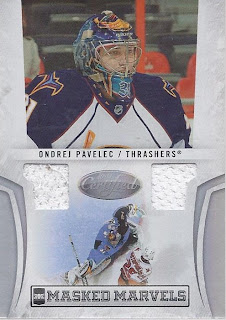 A nice double relic of Ondrej Pavelec. As a bonus, the back of the card tells the story of the mask design. 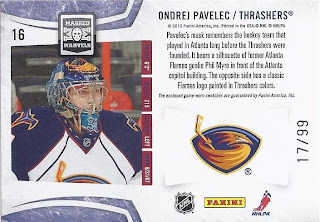 And that /99 isn't too shabby either.
Posted by buckstorecards at 07:20