I'm still waiting for the COMC stuff, but a couple of packages from the breaks arrived. Why not post about some of my favourites from that. The first to show up on Monday was from a break at O No! Another Orioles Blog!. There, I went for the Canadiana double play with the Jays and Expos, and got the Phillies and Diamondbacks out of the ol' randomizer. 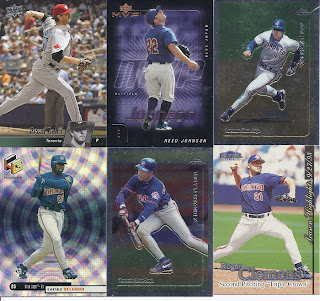 The break consisted of '99 HoloGrFX, '99 Chrome, 2002 MVP, a Fleer Tradition Update Set and a few packs of 2010 Upper Deck. You can see samples of all of them here. I like having a new Delgado for the personal collection, but my favourite is the Brian Tallet, since it has one of the holiday caps. It is a road game, and it looks like it is at Yankee Stadium, so I can cross-reference with baseball reference to the 4th of July weekend of 2009, and learn the photo is likely from this game. Fun! 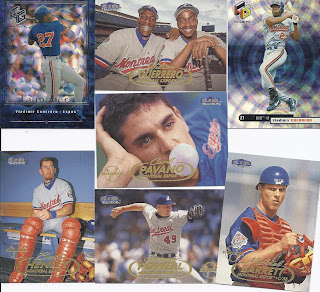 Lots of Expos goodness in the Tradition Update set. I really like the Guerrero(s) card, and the Pavano is definitely not your standard rookie photograph. More Vladdy in the HoloGrFX portion as well. 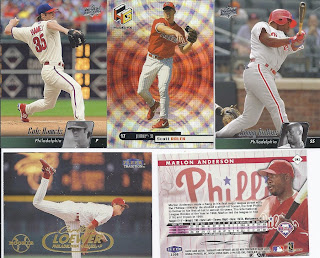 There wasn't much that grabbed me with the Phillies portion of the break. Still, the misuse of literally on the back of Marlon Anderson's card made the grammar pedant in me shudder. Then again, if it was a home game, maybe some fireworks went off. 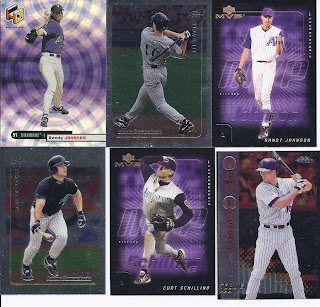 The pinstripes really pop out nicely on the Chrome cards. I'll never be upset pulling a Randy Johnson card on a break.

Also, the cards from the Toddfather break arrived yesterday. There, I had the Jays, and I also grabbed their expansion cousins from Seattle. The '02 MVP did have a nice Ichiro subset, and I was hoping to score an insert or 2. 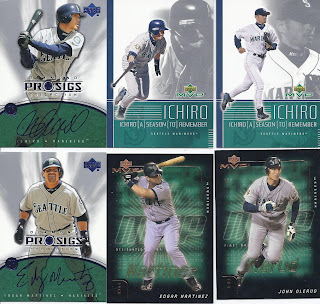 I didn't end up with a lot of cards with the Mariners, but I did pull some nice names. Since Olerud is on the players to do the double dip with my two favourite teams in Toronto and the Mets, he's another player I always love to find. 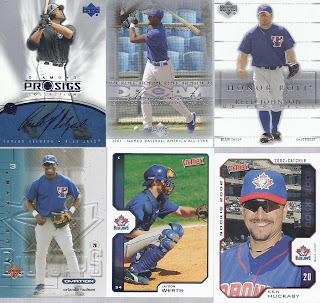 The Jays portion brought home another Delgado. I like the Werth card since it shows him catching, and it doesn't appear he ever played behind the plate in a big league game. At least Delgado played catcher a couple times. Ken Huckaby is best known as the guy that Derek Jeter slid head first into, dislocating his shoulder in the process. Hudson and Johnson were popular during their time in Toronto, so cards of them are nice as well.

I also got randomed a couple cards from the undrafted teams. 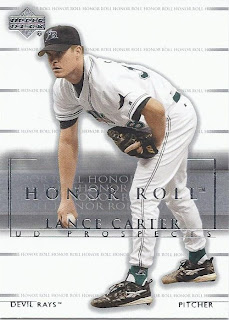 This one seems like a fine candidate to end up in my misc. baseball binder. 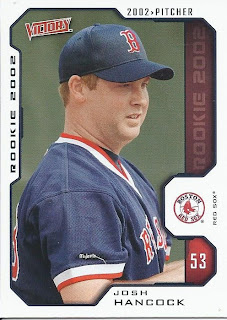 But this one is kinda depressing.

Posted by buckstorecards at 08:32