What would get a cheapskate to pay?

The very name of this blog shows my frugality. Most of my cards originate from bargain repacks at dollar stores I notice while going around town. It's easy, and it's a quick trip down another aisle when I swing past there for coffee filters, a Sudoku book, or whatever. It's always great when I see a card peeking through the front of the pack that I had no idea existed prior to seeing it. The Barilko and Glencrosses I recently posted are the perfect example of that.

Given that, what could get me to shell out more that a dollar for a single card? Perhaps because it mentions the coolest baseball related thing I'd ever seen in person. 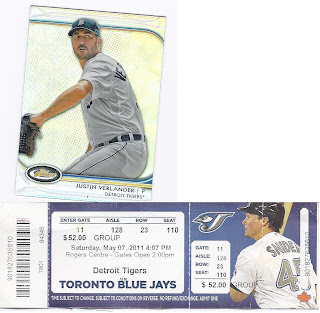 I'd been hunting for a Verlander card that saluted the no-hitter in Toronto ever since the 2012 cards came out. I really didn't care that I had to shell out an entire $1.50 to get this one. It was worth it just for the memories to come flooding back. Back to the only time other than a Mets visit where I rooted against the Jays in person. Heck, the game was 9-zip at the time, so any guilt in cheering for a no-no was quickly removed. The incredibly dramatic 12-pitch J.P. Arencibia at-bat that resulted in the only base runner of the day, thus breaking up El Perfecto. The fact the card even mentions that he was quickly erased on a double play, since I told the person next to me that Edwin Encarnación would just hit into a double play anyhow. And the strike out of Rajai Davis to end the game, cheering along with 23000 of my closest friends.

Memories. That's why I'll occasionally spend a smidgen more.
Posted by buckstorecards at 02:45